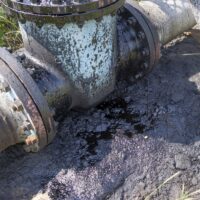 The New Jersey Spill Compensation and Control Act (Spill Act) establishes that anyone responsible for a discharge of hazardous substances is liable in contribution to the party that remediates the spill. Language in the Spill Act can be very vague, and alarmingly broad, with regard to who may be held responsible. Recently, a Spill Act claim was brought against a party who never owned or operated the property or even the tank in question, but who merely delivered the oil that eventually spilled. Can a party who delivered oil to an underground storage tank (UST) be liable if the tank eventually spills? How far does Spill Act liability extend? Below, we discuss the appellate court’s unpublished decision on the issue. Call a licensed underground storage tank remediation and removal professional if you need assistance with a damaged or contaminated UST.

Merely Delivering Oil is Not Enough to be Responsible for Spill

The case titled Dorrell v. Woodruff Energy, Inc. involved the owner of a general store and her claims of contamination. When she sought to sell her property, she found petroleum contamination in the soil and groundwater. She filed claims for contribution against three parties, including Woodruff Energy, Inc. (Woodruff). Woodruff regularly delivered fuel oil to a 1000-gallon above-ground storage tank (AST) in the store’s dirt-floor basement. Over the years, oil had seeped from the tank into the ground. Pursuant to language in the Spill Act, the plaintiff alleged that Woodruff was a party “in any way responsible for” the hazardous substance found on her property and was thus “strictly liable” for “all cleanup and removal costs.”

On appeal, the court found that Woodruff did not own the tank and was not responsible for its condition. Woodruff’s only contribution was delivery of the oil, some of which contaminated the property. The court refused “to find that mere delivery of oil, that is at some later point discharged from a tank, is sufficient to establish liability.” Woodruff did not own the tank and had no contractual responsibility to inspect or maintain the tank, and the plaintiff did not show that Woodruff specifically contributed to the likelihood of a spill–such as by delivering or installing too much oil for the tank on any given occasion. Therefore Woodruff could not be held liable under the Spill Act.

The court’s opinion was also notable for its discussion of qualifying experts in a Spill Act case. The plaintiff brought claims against another party, Chevron U.S.A. Inc. (Chevron), a successor to Gulf Oil Limited Partnership (Gulf), based on the fact that Gulf installed and then abandoned a nearby underground storage tank that may have contributed to the plaintiff’s site contamination. The court found that installing and abandoning a tank is enough to render a party “responsible” for any contamination that arises from the tank. The interesting issue turned on whether the Chevron/Gulf tank actually contributed to the contamination.

The site was contaminated with gasoline, but the evidence was unclear on whether the tank in question contained gasoline as opposed to just fuel oil or kerosene. If the tank was used to store gasoline in the past, Chevron would be liable for gasoline contamination. If not, then Chevron would not be liable.

The plaintiff relied on a licensed site remediation professional (LSRP) to testify about certain “identifying factors” that would suggest the presence of gasoline. On appeal, the court found that the LSRP was qualified to testify about subsurface conditions generally, but lacked qualifications to specifically testify as to whether certain identifying markers indicated the presence of gasoline as opposed to other petroleum products–a vital distinction at issue in the case.

The court remanded for a reexamination of whether the LSRP used appropriate methodology to form his opinion about the presence of gasoline, and whether he was qualified in the first place to distinguish between gasoline and other petroleum markers. If the expert’s opinion is ultimately disqualified, Chevron will likely be able to have the plaintiff’s case thrown out.

If you discover a UST at your construction worksite or if you have to respond to a UST spill on your property, you need seasoned help from professional advisors with years of underground storage tank experience. For qualified and experienced assistance dealing with a UST on your property, call Herbert Lutz & Company in Florida at 954-971-5222, or in New Jersey at 908-862-8888.

By Hank Lutz and Roger Ferguson | Posted on May 3, 2021
Play Featured Video