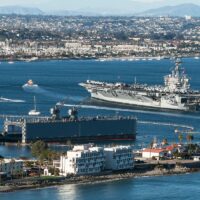 Real estate developers, gas station owners, and other private businesses are not the only parties to deal with problematic fuel storage tank issues. Managing underground storage tanks (USTs) and appropriately remediating any spills requires practiced hands, and failing to maintain storage tanks appropriately can lead to disaster. The U.S. Navy is learning that the hard way, having allowed fuel storage tanks located in Hawaii to leak into the surrounding water supply. The military is now facing an emergency order issued by the State of Hawaii to empty its USTs at Red Hill, a fuel storage facility servicing Pearl Harbor. To learn about the spill and the planned response, read on. Call a certified underground storage tank (UST) remediation and removal professional at Herbert Lutz & Co. if you need assistance with a damaged or contaminated UST in New Jersey or Florida.

In late November 2021, the Hawaii Department of Health began receiving complaints from water users near the Red Hill fuel storage facility, which services the Pearl Harbor naval base in Honolulu. Residents were complaining of gasoline and fuel smells in their drinking water. Investigators discovered a leak of more than 14,000 gallons of jet fuel at the Red Hill UST facility, contaminating water supplies and sickening or displacing thousands of military families. The latest leak follows a decade-long history of fuel leaks and contamination issues at Red Hill.

The recent event led to conflict between the state and federal governments. On December 6, the Hawaii Department of Health issued an emergency order (EO) requiring the Navy to suspend its operations at Red Hill and defuel the USTs. The order further compelled the Navy to take other remediation steps to ensure that the drinking water in the surrounding community is safe to consume. According to Hawaii’s deputy attorney general upon upholding the emergency order in late December, the military’s failures at the facility are a “ticking time bomb” that the Navy simply cannot handle. “The evidence shows that the Red Hill Facility is simply too old, too poorly designed, too difficult to maintain, too difficult to inspect, along with being too large to prevent future releases.”

The military fought the EO, arguing that Red Hill is the most important fuel depot in the Pacific and that it would take less drastic measures to address the leaks. The Navy argued it was sufficient to pause operations, quickly install water filtration systems to the affected island, and generally investigate the leak. Eventually, following denial of its appeal, the Navy relented.

In early January 2022, the military branch agreed to comply with the EO and drain the tanks at Red Hill. As part of the justification for giving in to the state’s demands, Navy officials revealed the hefty price the military has already paid in trying to deal with the crisis. The Navy has already expended more than $250 million in containment efforts. The Navy has until the beginning of February to deliver its plan to drain the millions of gallons of fuel stored at the Red Hill facility, and then has just 30 more days to start the defueling process.

If you discover a UST at your construction worksite or if you have to respond to a UST spill on your property, you need trustworthy help from seasoned advisors with years of underground storage tank experience. For comprehensive, effective assistance dealing with a UST on your property, call Herbert Lutz & Company in Florida at 954-971-5222, or in New Jersey at 908-862-8888.