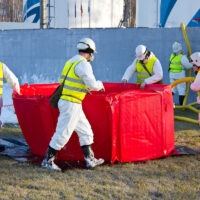 If you are the owner of a property where an underground storage tank (UST) has leaked, you are responsible for the cleanup.  If you later become the owner of a property where a UST previously leaked, the legal and financial responsibilities resulting from the prior leak are a bit muddier.  The New Jersey Appellate Division recently evaluated whether a subsequent purchaser was liable for the costs associated with remediation when the new owner had no part in the spill or remediation process.  While the opinion is unpublished and therefore cannot be used as binding precedent on other courts, it nevertheless serves as a useful illustration as to how New Jersey courts will evaluate reimbursement claims brought under the Spill Compensation and Control Act (Spill Act) as well as NJDEP agency procedures.

The matter of In Re Spill Fund Lien, DJ No. 129570-02; 954 Route 202 involved an appeal from a final agency decision of the Spill Compensation Fund. The case concerned a discharge of hazardous substances at a gas station in Branchburg.  The owner discovered a leakage in 1998 while removing three USTs on the property and notified the New Jersey Department of Environmental Protection (NJDEP).  After monitoring, sampling, and testing, the Department performed remediation itself using Fund resources in 1991.  In the meantime, Branch 2002 LLC (Branch) had purchased the gas station, with the prior owner’s insurance company indemnifying all subsequent owners from liability resulting from the preexisting discharge.

In 2002, based on the authority under the Spill Act, the Fund Administrator filed a lien on the property for expenditures and commitments incurred during the remediation process. Then in 2015, the Administrator amended the lien to reflect additional costs.  The NJDEP then sought to collect reimbursement for the remediation costs from Branch, the current owner.  A Spill Act lien recorded by NJDEP is treated as a first priority lien against real property, meaning it will be given priority over previously-filed liens filed against the same property.

Branch contested the lien with NJDEP and lost at the agency level.  On appeal, Branch made three arguments:  (1) Branch was not the “discharger” and thus was not subject to a lien under the Spill Act; (2) the lien contest procedures were not sufficient to grant Branch due process, in particular because the Fund was obligated to establish the reasonableness of its cleanup and removal costs before filing a lien; and (3) NJDEP knew a third party agreed to indemnify Branch for the Fund’s claims.  The New Jersey Appellate Division rejected each argument in turn.

First, the court held that the lien notice expressly identified Branch as a “person in any way responsible” for the discharge, and NJDEP sought reimbursement on that ground rather than by labeling Branch specifically as a “discharger.”  The New Jersey Supreme Court has held that a “discharger” includes a “person in any way responsible,” and Branch could not contest that it fell under this broader definition.

Second, the court found that Branch was afforded sufficient due process.  Branch was given advance notice of the lien, was afforded processes under the applicable regulations, a hearing officer heard evidence and concluded that the lien was warranted and, moreover, the lien did not affect Branch’s other real estate or revenues.

Finally, the court held that NJDEP was within its rights to pursue responsible parties at its discretion. It was under no obligation to go after the original owner or its insurer, regardless of any indemnification agreement between Branch and the original owner.

If you find a UST at your construction worksite or are dealing with a UST spill on your property, get help from trusted advisors with years of underground storage tank experience. For experienced, qualified, and dedicated assistance, call Herbert Lutz & Company, in Florida at 954-971-5222, or in New Jersey at 908-862-8888.