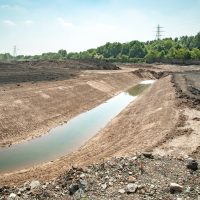 The New Jersey Appellate Division recently considered a matter in which the purchaser of a piece of property tried to hold a prior owner and that owner’s remediation contractor liable when the new owner found unexpected contamination. The court’s ruling is a reminder of the importance of conducting your own due diligence when purchasing a parcel of land. To learn about the case, read on. If you need assistance with a damaged or contaminated UST in New Jersey or Florida, call a certified underground storage tank (UST) remediation and removal professional at Herbert Lutz & Co.

The case titled Sunway Equity, LLC v. Suburban Propane, LP concerned a remediation job performed by a company called JM Sorge, Inc. (JMS). In 1991, defendant Suburban Propane, LP (Suburban) hired JMS to remove three underground storage tanks that contained gasoline, diesel, and waste oil from its property in Bridgewater Township. After seven years of cleanup work and reports exchanged between JMS and NJDEP, NJDEP finally issued a “No Further Action (NFA) Letter and Covenant Not to Sue.” The NFA acknowledged the completion of the remediation in accordance with New Jersey law. In issuing the NFA, NDEP explicitly relied on the representations of JMS and Suburban. Suburban and successors were required to conduct periodic monitoring of the site and certify that institutional controls were being properly maintained to continue reducing the levels of contamination.

In 2000, plaintiff Sunway Equity, LLC (Sunway) purchased the property from Suburban. Sunway agreed to purchase the property “as is,” although the purchase agreement included Suburban’s assurance that it had “disclosed all known and suspected environmental conditions that may impact the [property], including but not limited to” conditions relating to the prior tank closure, site assessment, and remediation work. The purchaser also ”agree[d] to assume and accept all obligations and responsibilities for said known and suspected environmental conditions.”

Sunway was given the chance to conduct its own soil, groundwater, and other tests to determine whether any contaminants remained. If Sunway found any hazardous contamination, it had the right to opt-out of the purchase. Sunway never conducted those tests, instead relying on the prior reports from JMS and the NFA issued by NJDEP.

Ten years after the purchase, Sunway leased the property to a tenant. The tenant discovered arsenic in the soil. Sunway then sued Suburban, JMS, and other parties for negligence and violation of the New Jersey Spill Compensation and Control Act. The trial court granted JMS summary judgment on the grounds that Sunway’s claims were barred by the statute of limitations and, further, JMS owed no duty to Sunway regardless.

The Appellate Division agreed. The court found that Sunway’s legal claims had long since expired due to the statute of limitation. Even had the limitations period not expired, however, JMS violated no duty owed to Sunway. JMS had a duty only to turn over its reports and files to Suburban, ensuring that any subsequent purchaser (like Sunway) would have all pertinent information relating to JMS’s remediation efforts. JMS would have no way of knowing that such a purchaser would rely exclusively on those reports and fail to conduct any of their own tests years down the line. Suburban had a duty to turn the reports over to Sunway (which it did). No further duty was owed by JMS to Sunway.

The Sunway Equity case is a stark reminder of why it’s so important to hire a competent, professional, and thorough LSRP to conduct your remediation. The case also illustrates the importance of conducting your own environmental testing prior to purchasing a piece of property, with the right UST specialists on your side. The court specifically referenced Sunway’s lack of due diligence; their damages resulted from them choosing not to conduct their own tests prior to closing the purchase. Sunway also had been Suburban’s neighbor at the time and knew the extent and limits of JMS’s remediation.

If you discover a UST at your construction worksite or if you have to respond to a UST spill on your property, you need trustworthy help from dedicated advisors with years of underground storage tank experience. For skilled, thorough assistance dealing with a UST on your property, call Herbert Lutz & Company in Florida at 954-971-5222, or in New Jersey at 908-862-8888.